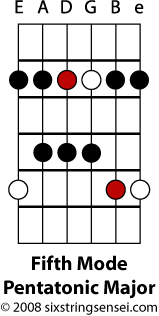 The Fifth Position of the Pentatonic Major Scale

The fifth note in the scale of G major pentatonic is E, so we will begin this fifth mode on the E at the 6th string, 12th fret. Notice how it directly ties to the fourth position we played earlier. All the notes on the right of the fourth’s position pattern are the same as the notes on the left of the fifth’s positon pattern. Remember to learn these in order, so if you landed on this page first after searching the web, go up to the menu and find the first mode and begin there.